Several months ago, a friend from Florence, Missouri, asked if I knew about the deaths of three women in the United Church of Christ Cemetery.  All three had been married but died as young wives.  She wondered if I knew their stories.  I knew one, and immediately went to work on the other two.  May their stories never been forgotten.

Sena Louise was born on June 1, 1891, to John Henry and Louise A. (Bremer) Brauer in Morgan County, MO.   The 1910 US Census shows 18-year-old Sena living with her family on a farm in the Florence area.  Other families listed on the same page of the census (families were visited in order so these would have been their neighbors) included:  Henry Muck, Claus Heineman, Mary Baughman (widow), Henry Chilacoat, Herman Meier, Robert Williams, Robert Holman, Harvey Sanders, and John Ditzfield.  Sena’s father John had emigrated from Germany in 1867 and was a naturalized citizen.

According to her death certificate, she died on April 17, 1918, of acute nephritis.  They had no children.

August Oehrke’s WWI Draft Registration Card, June 5, 1917.  While his wife’s name is not listed, it would have been Sena.

After Sena’s death August (1887-1972) married Frances Geminden (1898-1991) in 1925 and they had two children: Donald and Darlene (Ralph R. Thomas).  August served his country during WWI and worked at the Smithton Creamery.  He is buried with Frances in Highland Sacred Gardens in Sedalia, MO.

August and my grandpa Carl C. Siegel were friends.  They were born months apart, lived in the same town and were likely life-long friends. I wonder if the loss of their wives one year apart brought them together in grief and kinship. 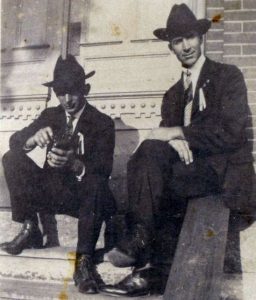 Minnie Bremer was born either on May 22, 1891, or 1892 to August and Helene “Lena” Kurtz Bremer.  Her gravestone says 1891, but other records differ.  According to church records, she was born in 1892 and baptized in the German Evangelical Church in Florence (St. John’s United Church of Christ) on July 3, 1892, as “Minna Anna Catherine Bremer.”

In January 1920, when the federal census was taken Minnie and William lived on the Florence & Smithton Road in Richland Township, Morgan County, MO.  They had three children and Minnie was pregnant with Kalo.  Three months after the census taker’s visit, Minnie gave birth to Kalo, and likely had a rough time with the birth as she died one week later.

August Bremer (1866-1939) was born in Hannover, Germany.  His father was Dietrich Bremer (1817-1900).  August’s mother Eulalia Catherine Siegel was born on May 10, 1826, in Rüscheid, Landkreis Neuwied, Rheinland-Pfalz, Germany.  She was baptized five days later, on May 15th in the Evangelical Lutheran Church in Rüscheid.  Her parents were Johan Ludwig Siegel and Anna Margaretha Kuhn, according to the baptismal record.  She died Nov 1, 1887, and is buried with her husband in the St. John’s United Church of Christ Cemetery.

August and Lena married in 1889 and had at least 8 children:

The third young woman is Mary Virginia DeHaven.  If you read this blog you know her.  She is the Mary in RomaMaryGrace. 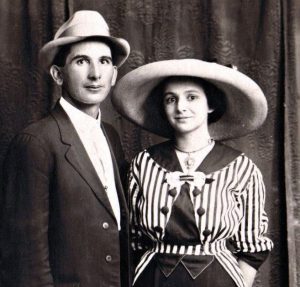 Mary Virginia DeHaven was born in Otterville, MO in January 1891 to Loomis Sweeten and Amanda Susan (Homan) DeHaven.  She married Carl C. Siegel on January 21, 1914 and started a family in their Syracuse, MO home.  Three boys soon followed: Carl (1915), Pete (1916) and Gene (1918).  The little family was happy.  Mary had attended the Baptist church Otterville with her parents, but in 1916 moved her membership to attend with Carl at the St. John’s United Church of Christ in Florence, MO.

America entered WWI in 1917, but while Carl was required to register for the draft, at thirty years of age and a family to support there was no reason to think he would be called to serve.  Then the influenza epidemic began sweeping the country in the fall of 1918, but again the family was spared.  That luck was not to last into 1919, however, when in the late spring both Carl and Mary were sick with the flu. On April 1, 1919, Mary Virginia lost her battle with influenza.  She was 29 years old. Mary is buried United Church of Christ Cemetery, Florence, MO.  Carl is buried with his second wife Roma Rasa in Memorial Park Cemetery, Sedalia, MO.  Mary’s parents and two brothers are buried in Otterville in the IOOF cemetery.

Mary’s obituary stated that she was “a dutiful daughter, a loving sister, a faithful wife and a well attendant at the house of worship.”

Mary’s parents, Loomis and Amanda had four other children, all girls who did not survive:

One thought on “Three Young Women, Gone Too Soon”