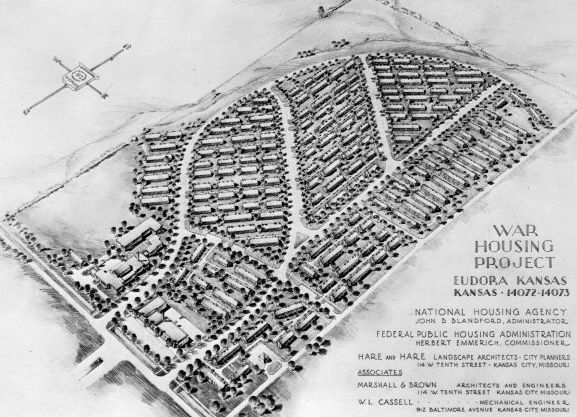 The Sunflower Village Historic District was listed in the National Register in 2014 as a rare example of “temporary” war-time housing that was built by the federal government in 1943 and evolved into housing for veterans during the post-war housing shortages. 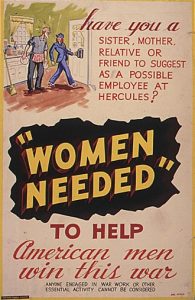 Sunflower Village was constructed in 1943 by the federal government (funded through the Lanham Act) as temporary housing to address the immediate housing need for workers at the Sunflower Ordnance Works (SOW) in northwest Johnson County, Kansas.  Like most war plants, the initial plans for SOW did not include construction of any housing.  An increase in the number of plant workers and overcrowded conditions in nearby communities combined with war-rationed rubber and the plant’s rural location, necessitated the housing project’s rapid construction shortly after the plant began its first powder production.

In addition to affordable housing for plant workers, Sunflower Village grew quickly into a bustling town with a movie theater, grocery and drug stores, churches and community center.

Initially built and operated by the Federal Public Housing Authority (FPHA), the housing project continued to fill a crucial role – that of affordable housing in Johnson County – under private ownership.  Although privately-built housing built during the post WWII years ultimately caught up with demand, Sunflower Village continued to provide needed affordable housing.  Illustrating the ongoing demand for affordable housing, the Village had over 1100 residents in 1960, less than one year after reopening under private ownership.

Sunflower Village is also historically significant in the areas of Community Development and Planning as an outstanding and unique example of a Garden City and a “federal company town” – a self-contained residential community complete with commercial, educational, social and recreational facilities.  Designed by prominent Kansas City landscape architects and city planners Hare & Hare, the plan for this war housing project embodies the principles of the Garden City community planning.  The strategy combines curvilinear primary roads with secondary lanes on a traditional grid-pattern and utilizes a hierarchy of circulation paths to roads to create intimate neighborhoods to provide a safe and healthy environment for residents.  In addition to public green space, recreational ponds, and landscaping, the rows of houses faced one another without intervening roads creating open green space between every row of homes – to encourage a sense of community.

The dwelling units themselves were designed by Kansas City architects Marshall and Brown and are distinguished by their uniformity, simplicity, and total void of ornamentation and detailing.  Utilitarian in design and function, the primary significant factors that are reflected by the individual buildings are the speed in which they were constructed, the influence of war-time materials rationing on their design and construction, and that the project was designed to be temporary.

Despite its origins as temporary war housing, Sunflower Village served as veteran and student housing during the post-WWII housing shortage and continues today as an affordable housing community, under private ownership for 55 years.  With nearly 90% of the original buildings extant, Sunflower Village has stood the test of time.

Sunflower Village retains a high degree of historic integrity of location, setting, neighborhood design, feeling, and association clearly conveying its origins and long-term history as a housing community.  Key characteristics of the original design including pedestrian and vehicular circulation and the layout of homes and green space, all remain with little or no modification.  Today Sunflower Village remains a cohesive district and is significant as a unique early “modern” suburb in rural Johnson County.

The Sunflower Village Historic District retains the physical components, spatial organization, and design aspects that illustrate its original Hare & Hare design based on Garden City planning principles.  The community clearly conveys the feeling and association affiliated with its origins as World War II worker housing and its long-term function as affordable housing in Johnson County.