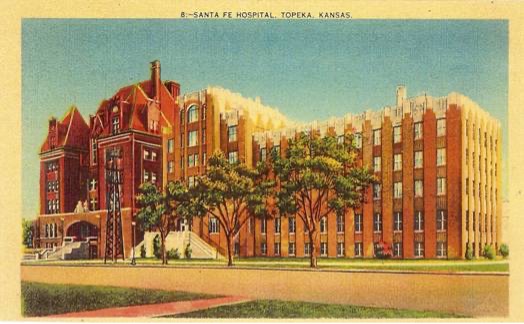 Topeka, Santa Fe & the Building of a Modern Medical Institution

Over the last few weeks, I have been researching a small hospital in Kansas and it reminded me of an earlier project where I learned a lot about railroads, their development across the United States, and the advent of modern medical care.

The Santa Fe Hospital in Topeka, Kansas was listed in the National Register of Historic Places in 2016 recognizing the building’s significant role in healthcare for the State of Kansas and specifically, Santa Fe railroad employees.[1]  Located near downtown Topeka when it was constructed, the hospital was an integral piece of Topeka’s history.  This first article of the series will focus on how Topeka became the home of the largest and most important railroad hospital.

Cyrus K. Holliday played a significant role in the establishment of Topeka and the Santa Fe Railroad.[2]  He served two terms as president of the railroad (1860-1864 and 1896-1900).[3]  One of the initial founders of the town, Holliday would go on to represent Topeka in the territorial and state legislature as well as being voted mayor three times.  Holliday wrote, introduced, and promoted passage of an 1859 bill to incorporate the Atchison and Topeka Railroad.  He lobbied Congress for the provision of federal land on which to build the railway; then turned to the people to rally their support.  In October 1868, nearly ten years after the granting of the first charter, the work building the road began.[4]  Holliday continued to support the town and the Railroad. He got the city to issue $100,000 in bonds for Atchison, Topeka, and Santa Fe Railroad (ATSF) in return for the railroad agreeing to keep its general offices and shops in Topeka in perpetuity.  This action cemented Santa Fe’s long-term relationship with the Capital City.[5]  The first locomotive of the Santa Fe Railroad was named the “Cyrus K. Holliday” after the man who had envisioned the greatness of the capital city and the railroad that made it so.

As the railroad expanded, it quickly became clear to the leadership of the ATSF that to keep the railroad running at peak performance employees would require quality, accessible healthcare, something not commonly provided by employers nor available to workers outside large cities on the East Coast of the United States. Thus, Santa Fe chose to build hospitals for company employees. On April 7, 1884, the Atchison Railroad Employees’ Association was formed as a benevolent and charitable corporation distinct from the railroad.  By 1929, the hospital association covered 57,540 Santa Fe employees across Illinois, Iowa, Missouri, Nebraska, Colorado, Oklahoma, Arkansas, Tennessee, New Mexico, Arizona, California, and Kansas.  The association had begun with $55,000 capital from ATSF. Four hospital buildings were authorized for immediate construction with ATSF Railroad providing the land as well as manpower and materials for construction.  The first hospital opened in Las Vegas, NM on October 11, 1884, followed by a second in La Junta, CO, in November of the same year. Hospitals in Ottawa, KS, and Fort Madison, IA, followed in 1888.

By the late 1880s Topeka was the center of the Santa Fe empire, due in large part to the efforts of Cyrus Holliday.  The road span thousands of miles first down to Emporia, then to Atchison, later over to Kansas City.  By 1910 the road extended from Topeka to Galveston, from Topeka to Los Angeles and San Francisco, and from Topeka to Chicago – always Topeka the hub and home of the system.[6]  Not only was Topeka a crossroads for the major lines, it also was the location of Santa Fe’s principal offices and shops.  It was, therefore, the logical location for the largest hospital and headquarters of the Hospital Association. Santa Fe employees in Kansas complained about the distance required to travel for healthcare and in 1892, 2,300 Santa Fe employees petitioned for a facility to be built in Topeka.[7]

In 1896 Santa Fe broke ground on the first Topeka hospital located at 6th and Jefferson Street, the northeast corner of the current site. The railroad donated the land and gave $30,000 toward hospital construction.[8] The hospital opened its doors on June 22, 1896, providing 100 beds for Santa Fe Railroad employees. In 1897 the hospital treated 341 patients; a number that climbed to 461 the following year.[9]

As of June 1916, the railroad had spent $178,428.33 on the land, original cost of building and improvements of the Topeka hospital.[10]  The Topeka Santa Fe Hospital and the Hospital Association had earned credibility and trust leading to a dramatic increase in patients and members. Even with seven geographically dispersed medical facilities, Topeka often was operating far beyond its intended capacity throughout the 1920s.

As with many other hospitals designed in the 1880s to early 1900s medical and scientific advancements made Topeka’s Santa Fe Hospital 1896 design out-of-date. In order to accommodate patient expectations and modern medical requirements, the old Topeka Santa Fe Hospital would have to undergo significant change. In 1929 the board voted to proceed with a modern expansion to ease congestion in the existing facility and according to the Topeka Capital Journal, to provide “a much larger number of private rooms for patients seriously ill.”[11]  In December 1930 the new hospital was opened. The five-story facility was state-of-art with a new surgical department, private patient rooms, medical library, and doctor’s offices as well as a lab and x-ray department.[12] As the second largest hospital in the city, the Santa Fe Hospital provided care for the 5,000 Santa Fe employees that called Topeka home.[13]

The hospital constructed in 1930 would undergo numerous modernizations and continued to operate as a hospital until its closure in 1989. The next article in this series will look at railroad medicine and the role of the Topeka hospital.

Today, a visitor can see the footprints of Cyrus K. Holliday in Topeka.  A city building is named for him, a statue of him is nearby, as well as a historical marker in Holliday Park.  More recently Iron Rail Brewing opened on South Kansas Avenue.  The pub celebrates the city’s rail history and Holliday’s role in it with a restaurant filled with beautiful murals.  Oh, and they have beer!

[1] This article has been excerpted and updated from the Atchison, Topeka and Santa Fe Hospital Nomination to the National Register of Historical Places I co-authored in 2016.  The complete nomination is available here.