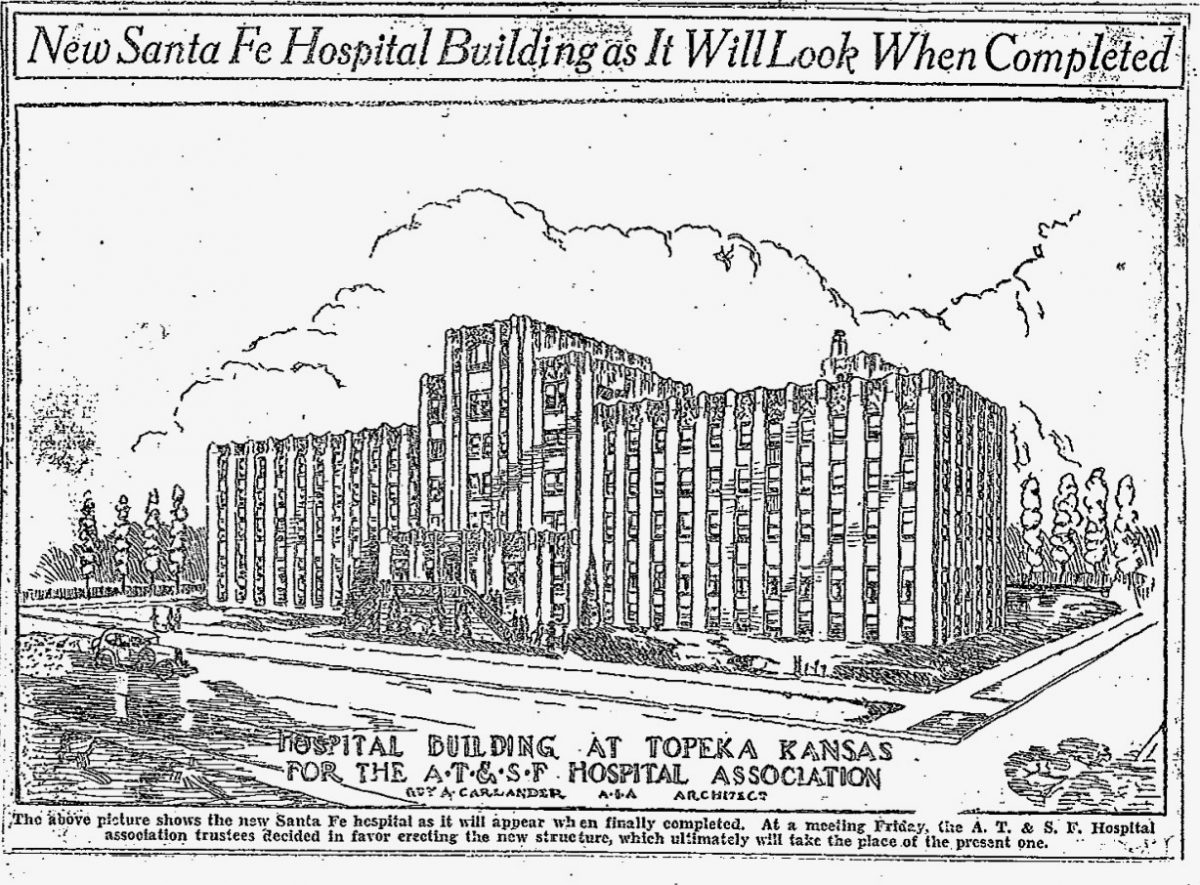 The Architecture and Functional Evolution of an Institution

The Santa Fe Hospital in Topeka, Kansas was listed in the National Register of Historic Places in 2016 recognizing the building’s significant role in healthcare for the State of Kansas and specifically, Santa Fe railroad employees.[1]  Located near downtown Topeka when it was constructed, the hospital was an integral piece of Topeka’s history.  This article, the third in a four-part series, will focus on the architecture of a modern hospital and its evolution to senior living.

The “new” Santa Fe hospital building – occupies the site where Topeka’s first Santa Fe Hospital was built in 1896 and stood until 1952 when it was razed for expansion of the 1930 building.  The Santa Fe Hospital Association, founded in 1884 owned and operated the hospital(s) representing one of Santa Fe’s industry-leading employee benefits.[2]  Topeka’s Santa Fe Hospital exemplifies the commitment Santa Fe made to its employees to provide quality medical care; a fact borne out by its almost constant efforts at modernization.  The 1930 hospital was expanded in the 1950s, 1960s, and 1970s not only accommodating medical advancements but broadening its services to include outpatient and long-term care for the company’s employees.  The hospital complex reflects its period of construction and expansion and continues to convey associations with its original function.

The 1930 hospital was fireproof construction with brick facade that featured ornate stone detailing.  Although expanded on multiple occasions, the 1930 hospital is clearly distinguishable among the varying sections of the existing hospital complex.  The “new” hospital was designed to ultimately replace the 1896 hospital but was built as an addition off the west side of the old hospital.  This strategy allowed continual operation of the hospital during construction.  The fifty-four-room hospital opened in January 1931, completed at a cost of $275,000.[3]

The interior of the new hospital, built by George Senne of Topeka, reflected new trends in hospital construction, namely the use of hard surfaces that emerged from the Progressive Era as a sanitary solution to combat tuberculosis.  Flooring was reportedly black and white terrazzo, walls were colorful tile, and furniture was steel enameled to look like walnut.  Glazed tile remains in place on the top floors of the entry wing.

The 1930 design by Amarillo architect and former Santa Fe employee Guy A. Carlander was typical of many institutional buildings of the Progressive Era reflecting simple, symmetrical rectangular massing with flat roofs and parapets which contrasted with their nineteenth-century counterparts.  However also typical of the period, the hospital incorporated applied ornamentation in the form of the carved-stone parapet cap and detailing at the front entrance.  Changes to the exterior of the 1930 hospital occurred with many of the subsequent expansions.

By the fall of 1947, the Hospital Board announced expansion plans that would double the size of the hospital.  Kansas City, Missouri architects Archer, Cooper and Robison[4] were hired to design the expansion which was estimated to cost more than one million dollars.  In December 1949, hospital officials announced plans to make Topeka’s Santa Fe Railway Hospital one of the finest industrial hospitals in the nation.  The expansion was to include three new hospital wings.

M.W. Watson of Topeka was selected as the general contractor, while Sheahan and Degan, plumbing and heating, and Thatcher Co., electrical contractors also were named.  Twenty-four months later construction was completed on the west and south wings and work shifted to the final phase of the $1.3 million project – demolition of the 1896 hospital and building the new east wing.

Like construction of the 1930 hospital, the 1950 expansion was designed to provide the latest in modern medical care.  In addition to expanded services, state-of-the-art features included two-way communication between nurses and patients and a pneumatic tube system that eliminated the need for a messenger service making possible delivery throughout the hospital in a matter of seconds.  Many of the functions that had been housed in the 1896 building were relocated to the new west wing providing space for approximately 100 patients along with diagnostic and specialty departments.  An outpatient clinic was located on the first floor of the west wing with a new entrance off Madison where a spacious lobby also served as the waiting room.  A new x-ray department was located on the second floor of the new west wing which featured photo timing designed to reduce human error and spot filming that made possible taking films during fluoroscopic examinations.[5]

In 1956 the entire hospital was air-conditioned by McElroy Refrigeration & Heating Co. of Topeka.  The Hospital Association announced the construction of a $500,000 long-term care facility in the fall of 1962 to be designed by Cooper, Robison, and Carlson.[6]  Bowers Construction Co. of Topeka served as the general contractor.  The new long-term care wing opened in February 1964 designed to accommodate 70 patients in double rooms that featured built-in wardrobes and bathroom facilities.  The wing provided visitor waiting rooms, nurses’ stations, and treatment rooms including x-ray, cobalt (radiation) and physical therapy, as well as special features to accommodate patients in wheelchairs.[7]

The hospital complex, encompassing more than a city block, reflects the modern movement in architecture, the original 1930 building having been “modernized” as part of the 1950 expansion.  The west wing was expanded on two occasions in the 1970s extending the 1950 wing to the south and east.  A two-story addition was built in 1950 off the rear of the 1930 hospital and a two-story addition was built as a new east wing in 1964 (expanded to four-stories in 1979).  The two final expansions occurred in the 1970s with additions of two patient floors on the east wing and further expansion of the west wing to house a new emergency department and south entrance, lobby and gift shop, and construction of a new energy center at the rear.  The existing complex represents the prominence of Santa Fe’s largest hospital, continually expanding to accommodate medical advances and the needs of the company’s employees.

The hospital continued to expand or modify its services in the 1980s, but these changes did not result in major physical alterations.  The hospital added inpatient and outpatient psychiatric care and an ophthalmic lab.  Despite extensive efforts to reposition themselves as a public hospital and provider of comprehensive outpatient services, Memorial Hospital filed bankruptcy and finally closed its doors in 1989.

The ATSF Railroad was the front-runner in the rail industry creating the gold standard of employee care.  The Santa Fe Hospital in Topeka played a significant role in the lives of Santa Fe employees, many of whom were Topeka residents, by providing a trusted source of state-of-the-art medical care for 93 years.

[1] This article is excerpted and updated from the Atchison, Topeka, and Santa Fe Hospital Nomination to the National Register of Historical Places I co-authored in 2016.  The complete nomination is available here.

[2] In 1966 when the hospital opened to the public it was no longer directly owned by the ATSF Hospital Association.  The Association contracted with the hospital to provide medical & surgical services to its members.