Historic Preservation
The National Parks Service (NPS) oversees historic preservation in the United States.  What does that mean? The NPS calls historic preservation “a conversation with our past about our future,” which makes it a perfect fit for genealogists.  There are three ways the NPS accomplishes their mission: 1.) Designation of historic sites, 2.) Documenting history and 3.) Physical preservation.  I have been privileged for the last few years to assist others in the process of documenting the history of properties from downtown business buildings, apartments, commercial districts, homes, government buildings and an entire self-encompassing village.  I have helped to conduct historic surveys in four small towns in Kansas that will enable city administrators and business owners to work together to preserve their collective history.
I have assisted clients by conducting house / building / property research resulting in over thirty properties being listed on the National and State Registers of Historic Places.  The non-profit organization National Trust for Historic Preservation explains on their website that “Old places shape the story of who we are, where we come from, and where we’re going. Historic places tell America’s full story. They inspire us and help us imagine what comes next.”  I couldn’t agree more!  I have found inspiring stories of business owners lives changed by historic events (Civil War, the Great Depression and WWII), legislative measures (Prohibition and passage of the National Highways Act), and social trends (roaring twenties) that have helped me to better understand what life was like in those times at the personal level.  Not just the places but stories of people too — their hopes, dreams, successes and failures – created the foundation on which our country and each of our own lives was built.

Some Recent Projects
Madonna of the Trail 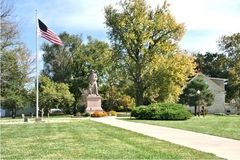 One of 12 Madonna monuments erected across the United States along the National Old Trails Road by the National Society of the Daughters of the American Revolution (DAR), the Council Grove Madonna of the Trail Monument pays tribute to the pioneer women who helped settle the West. The Council Grove Madonna is one of only three (of the 12) that are specific to the Santa Fe Trail. The monument reflects the early twentieth century movement to commemorate historic roads and trails, a movement initiated by the DAR. 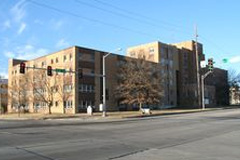 600 SE Madison
Topeka, Shawnee County, Kansas
Listed in National Register in October 2016
Architect: Carlander, Guy A.
Category: hospital
The Santa Fe Hospital Association, founded in 1884, built the existing hospital in 1930 to replace a former hospital at this location. The largest of the railroad’s hospitals, the Topeka hospital not only provided patient care but also served as home to Santa Fe’s Hospital Association, the railroad’s chief surgeon, and the medical dispensary. The hospital signifies Santa Fe’s commitment to the capital city and is a physical reflection of the shared history of Topeka and Santa Fe as the railroad and city grew. The building’s period of significance spans from the building’s construction in 1930 to 1966, reflecting the date of federal legislation creating Medicare and the hospital opening its doors to the public. Renamed Memorial Hospital in 1972 the hospital closed in 1989 after filing for bankruptcy; the last of Santa Fe’s seven hospitals to do so.

Sunflower Village is a World War II-era housing development erected by the U.S. government to address a critical housing shortage near DeSoto due to the influx of workers to the Sunflower Ordinance Works facility. This self-contained residential community complete with commercial, educational, social, and recreational facilities was a sort of federal company town. Designed by landscape architects Hare and Hare, the community is organized around a series of roads that form a hierarchy of circulation paths, separating pedestrian and vehicular traffic in the village. The layout combines curvilinear roads with a traditional grid creating multiple neighborhood clusters. The dwelling units themselves were designed by the Kansas City-based architecture firm Marshall and Brown and are distinguished by their uniformity, simplicity, and utilitarian design. The significant factors reflected by the individual buildings is the speed in which they were constructed, the influence of war-time materials rationing on their design and construction, and that the project was designed to be temporary. At the time of nomination, 157 of the 175 of the original residential buildings remain. It was nominated for its local significance in the areas of community planning and development, military, and government.

During its first 20 years the Powell Building was home to three mercantile/general stores but by 1916 it housed the city’s first opera house and theater. By 1919 the theater, called the “Electric Theater,” offered entertainment to the citizens as well as acting as a center for community events such as the Armistice Day celebration at the end of WWI. The building served the town’s civic organizations including the Odd Fellows Lodge, the American Legion Post and the Lions Club and also functioned as the city’s community hall for 20 years (1940-1960). While multi-purpose use of buildings is not uncommon in small towns, the Powell Building is significant in its broad utility for the town, likely touching the lives of every citizen for several generations and as one of the only relatively intact historic commercial buildings remaining in the town of Goff. 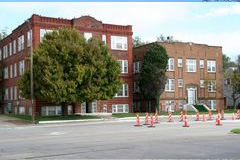 The Norton Apartments are adjacent brick apartment buildings designed and built in 1926-1928 by developers Frank C. Norton and Willis B. Crowther. The buildings are locally significant as representatives of Salina’s growth and expansion in the 1920s. Low-Rise Walk-Up Apartment Buildings, including the Norton Apartments, addressed the city’s expanding population and housing shortage following World War I. This new building type provided efficient use of land in locations already served by public infrastructure and provided multiple dwelling units in a common setting with similar amenities to compete with single family homes that were in short supply in Salina as well as other communities across the nation.