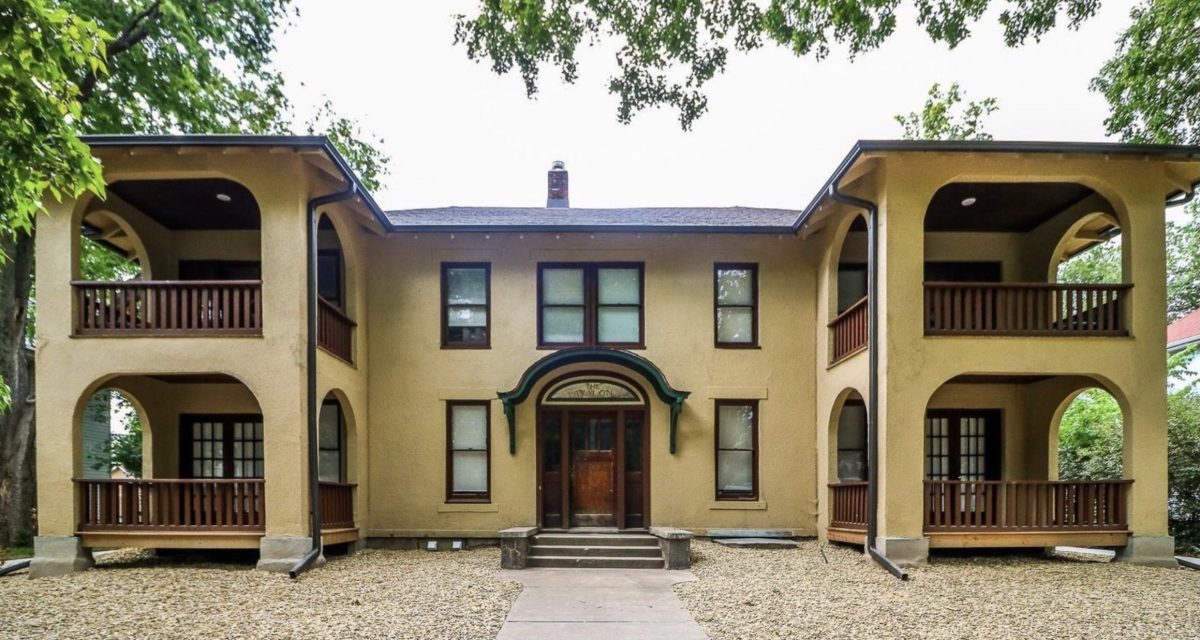 One of the reasons I like genealogy is I really enjoy delving into someone’s records to determine just what story lies beneath.  This was certainly true when I was researching a small apartment house called The Avalon in Manhattan, Kansas, to help determine its eligibility for listing in the National Register of Historic Places..[1]  The apartment block had an unusual beginning, as it was constructed as a single-family home sometime in the late 1880s-1890s.  No definitive date of construction was found for the brick home at 417 Fremont as Sanborn maps do not include Fremont Street until 1923.  Deed and newspaper research showed the property was owned by H.T. Merrifield from early 1872 through spring 1885.  The property changed hands four times between April 1885 and August 1895 when it was purchased by Joseph Floersch.  An advertisement in October 1904 was found in newspapers offering a nine-room brick house at 417 Fremont for sale or rent.[2]  In April 1907, James W. McDonald bought the property for $3500. The McDonald family spent the next fourteen years at the address and then sold to L.C. Sheriff for $5,500.  According to newspaper reports in early 1921 L.C. Sheriff had bought the McDonald house and was making it into apartments.[3]  Sheriff likely saw the value in apartments given the postwar housing shortage; however, our research led us to believe that Sheriff did not finish converting the house, the next owner, Morley P. Robinson did.  The Avalon apartment building was listed in the National Register on September 30, 2019.

While the apartment and its history are interesting, a man named L.C. Sheriff, sparked my interest.  Landrine Cicero Sheriff (1857-1934) was a businessman.  Born in Georgia and reared in Hickory County, MO, Sheriff was an entrepreneur who at various times in his life sold real estate, was in the oil business, and owned Independence (Kansas) Marble & Granite Works, to name but a few of his pursuits.[4]  In conducting research, I found Sheriff had no discernable link to Manhattan; the only likely connection being that he and James McDonald were in the oil business at the same time.  It seemed unusual at that time that an individual would purchase a property in a residential area filled with single-family homes and choose to renovate the house into apartments.  However, it seems, that is precisely what Landrine Sheriff did.

The first clue was found in an April 1921 Manhattan Mercury article that stated that “Mr. Sherriff of Independence, who bought the James McDonald home at 417 Fremont, is now having the house remodeled and will have it made into apartments.”[5]  While newspaper research is an excellent method to bridge census and other government records, I had to dig deeper into Mr. Sheriff’s past to try to understand and confirm his actions.  I began my research by establishing a timeline to determine if there are inconsistencies or gaps in a life story.

In the 1880 census I found twenty-three-year-old Landrine and his wife in Hickory County, Missouri, where he was farming, and Sarah was raising their three children.  In 1900, LC is still in Hickory County, Missouri, but the family had moved into town and LC’s occupation was listed as a grocery salesman.  He and his wife Sarah E. had been married for sixteen years and reared four children, three daughters and a son, in a home they owned without a mortgage on College Street in Weaubleau, Missouri.

By 1910 Landrine had moved to Black Dog in Osage County, OK. He and his wife were living on a farm they own but Landrine’s occupation is listed as real estate, an occupation he would retain for the rest of his career.  The biggest change, however, is that Sarah had died and fifty-two-year-old Landrine remarried a thirty-three-year-old woman named Josie A. McDonald.[6]  According to this record, this was Landrine’s third marriage and Josie’s second.[7]

On March 21, 1921, the Manhattan Mercury announced that LC Sheriff purchased Lots 256 & 257 in Ward 2 from J.W. McDonald, making Sheriff the owner of the McDonald home.[11]  Census records help to determine that Sheriff never lived in Manhattan, nor did he have family there.  Why then did he buy a large house in Manhattan? Historic context provides a hint that the city was experiencing growth, some of which was linked to the college, then Kansas State Agricultural College, today’s Kansas State University.  That fact did not make Manhattan recession-proof, but the school added level of economic stability.  Perhaps James McDonald, who likely desired a move to the West Coast for his health, asked Sheriff to buy him out.  McDonald may have even proposed the idea of apartments.   What cannot be known is whether LC Sheriff intended to keep the Manhattan rental property or whether it was simply a short-term investment.  Only two years after buying the house at 417 Fremont and remodeling it, he sold it to M.P. Robinson while building a $5000 (over $82,000 in today’s dollars) home on North Penn Avenue in Independence, KS, where he and his wife had lived since at least 1916.[12]  By 1930 Landrine was retired, and the couple were living comfortably on West Oak Street in a home valued at $8,000.  Landrine and Josie would live in Independence, Montgomery County, Kansas until Landrine’s death at age 77 on January 14, 1934.

Today you can rent an apartment in the home that once belonged to Landrine Cicero Sheriff at 417 Fremont in Manhattan, Kansas, although you might need to be cautious in claiming that the successful small-town businessman named Landrine ever hung his hat there.

[1] This blog is partially excerpted from the National Register nomination for The Avalon, I co-authored in 2019.  The nomination is available online at https://www.kshs.org/resource/national_register/nominationsNRDB/KS_RileyCounty_TheAvalonBuilding_Listed%2009302019.pdf