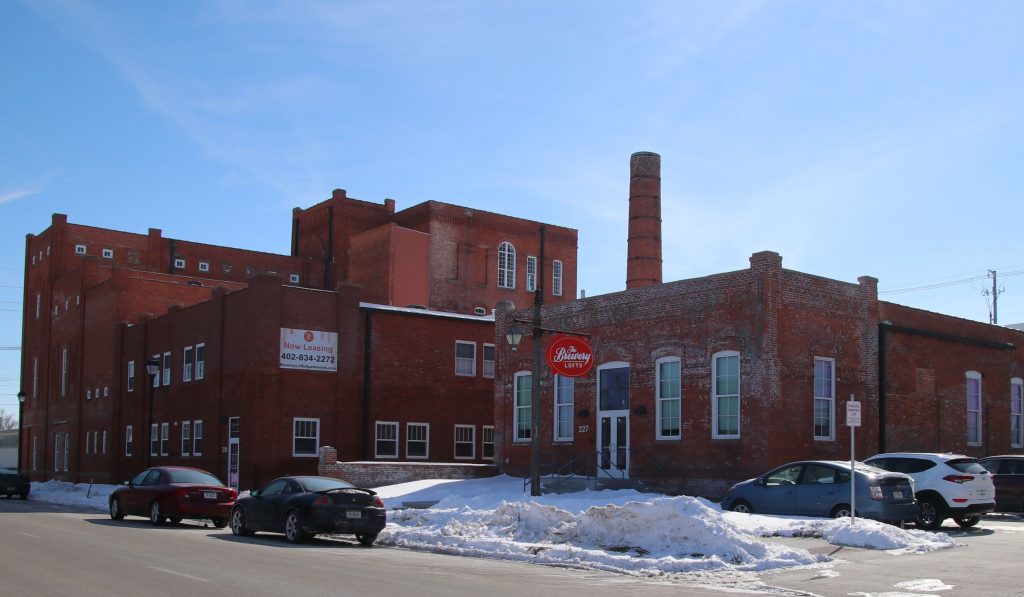 The Hastings Brewery Building at 219 W. 2nd Street in Hastings, Nebraska was nominated to the National Register of Historic Places on March 26, 2015.  I had the opportunity to work with Brenda Spencer of Spencer Preservation to research and write the historic significance of the property.  The brewery building is locally significant under Criteria A and C in the areas of Industry and Architecture as defined by the guidelines established by the National Parks Service.  The process of rehabilitating a building from identifying potential historical significance to listing on the National Register is only the first step.  Hastings Brewery Building is in the final phase and has been beautifully refurbished into loft apartments.  The photographs below document a few of the changes.  All photos were taken by Brenda Spencer unless otherwise noted. 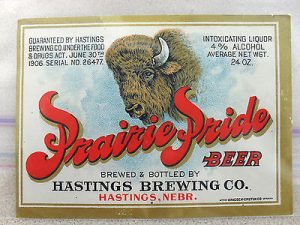 The Hastings Brewing Company was formed in 1907 with stockholders comprised largely of Hastings businessmen.  Established during a time when the temperance and prohibition movements were already well entrenched, the Hastings Brewing Co. focused primarily on manufacturing and distribution.  The firm specialized in the manufacture of lagers which had displaced ales in popularity; their most famous varieties were Ritter Brau, Prairie Pride Beer and Personal Liberty Brew all marketed as old-style German beers.  The popularity of lager beers was associated with German immigrants and resulted in major technological advances in the brewing industry.  Germans introduced the cold maturation lager that demanded controlled cooling which impacted the design of breweries to include ice houses and insulated rooms.  Shortly after opening, the brewery expanded, constructing a bottling plant.  By 1911, Hastings boasted the second largest brewery in the state. Despite the brewery’s early success, just nine years after the building was constructed, Prohibition passed statewide in the November 1916 election and went into effect in May of 1917, ending all manufacture and sales of alcohol.

While the vast majority of Nebraska’s breweries closed, The Hastings Brewing Co. reorganized into Hastings Cream and Beverage Company.  They produced ice cream and non-alcoholic beverages for a short time but the venture was not profitable.  The Bottling Works facility, a separate one-story building on the south, was sold to Ward C. Hunt in 1920 and became home to Hastings Ice Cream Company - a function it served for the next thirty-plus years. 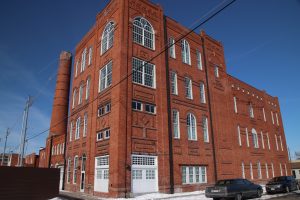 The second phase of the main brewery facility began in 1924 when established Hastings’ German-born businessmen Karl Kauf and George Rinderspacher relocated their meat processing and grocery wholesale operation to the brewery building.  K and R, Inc., as the company became known, was a giant in the grocery industry in Nebraska and the high plains.  The company was known for its support of local farmers – buying local livestock whenever possible for its production of sausage and meat products under the brand name Country Maid (and later for its production of french fries), and for its wide distribution of a full line of grocery products including Kraft cheeses, canned fruit and vegetables, and margarine.  K & R expanded the brewery facilities on at least three occasions to meet the needs of their growing company.  They occupied the building for more than fifty years, ultimately closing in 1979.  The building was used for cold storage for a time and then as a warehouse, but it has largely been underutilized for the past 25 years.  The Hastings Brewery Building is significant as a prominent representative of Hastings industrial development in the first half of the twentieth century.

The Hastings Brewery Building is architecturally significant as one of the last extant brewery facilities in Nebraska.  The building is representative of the final phase of pre-Prohibition brewery architecture in the Midwest, a professional-designed facility that embraced the technological advances of the brewing industry.  The Hastings Brewery Building is an excellent example of a smaller-scale regional brewery.  It is locally significant as an industrial example of Late Victorian architecture in Hastings, a style typically seen in institutional and residential architecture but breweries tended to be the exception to that rule.  Specifically, the Hastings Brewery is a representative of the Rundbogenstil, or German round arch style, an eclectic style that combines Romanesque and Renaissance design elements.  The style is characterized by the building’s multi-story massing, its monumental brick facades, and its use of large round-arched window and door openings.  Despite later alterations to accommodate the large warehousing operation of K & R Food Products, Inc., the building retains clear evidence of the arcaded round-arched openings that distinguish this unique style of industrial architecture.  The building’s massing is reflective of at least four major expansions, a fact that in itself portrays its enduring tenure as a manufacturing and warehouse facility.  The period of significance begins with the building’s construction in 1907 and extends to 1945, the last major expansion by K & R, Inc., bringing the building to its current massing and configuration.