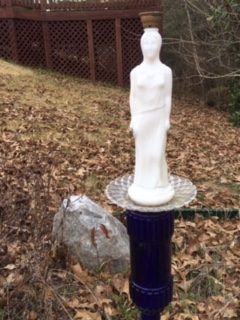 Today, Groundhog Day, is Eloise Grubb’s birthday.  Many of you have never heard of her.  Eloise Chastain Grubbs (1916-1986) lived across the street from the Spencer family in the 1960s.  She was born in 1916, the daughter of Mabel (Harmon) and Wesley Erskin Chastain on their farm near Harrison, Arkansas, when her parents were twenty-six and thirty years of age, respectively.  Wesley and Mabel married in Illinois around 1909, according to the 1910 Federal Census where they were listed on a farm in Emma, White County, IL.  Both had been born in Illinois, as had their parents and Eloise’s maternal great grandparents.[1]

By 1930 the family is living in Harrison, Arkansas and Eloise had three siblings John (9), Frank (9) and Sally Rae (1).   According to the census Mr. Chastain was working as a “drayman” conducting “city delivery.”  Since prohibition was the law of the land that likely means Mr. Chastain delivered goods from a local store to homes in the city with a horse and wagon.  The family owned their home valued at $5000.[2]

Ten years later, Eloise was living with her parents in Fayetteville, AR.  After four years of high school Eloise was working as a beautician at La Rose Beauty Shop.  Her father was a janitor at a local church, likely having lost their home during the Depression.  According to the census she was making about as much money as her Dad.  Her younger siblings were all in school so the income was a necessity for the family; a fact of life for so many. This reality had to be challenging for a father.  During the Depression families not only struggled to survive financially, but also to accept changes in traditional family roles.

While living in Fayetteville, Eloise met a local boy and fell in love.  Travis W. Grubbs, two years her senior, had enlisted in the Army Air Corps on July 23, 1940.  Eloise joined Travis in Spokane, WA, where on January 29, 1942, they were married.  The newlyweds had little time together as Travis reported to his new post in Tucson, AZ two weeks later and Eloise went home to Fayetteville, where she lived with her parents for the duration of the war.

By 1947 the couple were listed in the Fayetteville city directory making it likely that Travis was out of the military by that date.  Sometime in the late 1950s the couple moved to Springfield, Missouri, where in the following decade they saw a young family named Spencer move in across the street. 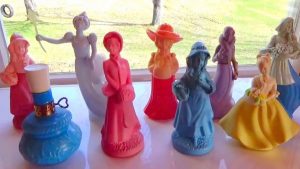 There are  two things that stand out in my memory of Eloise Grubbs – her raspy voice (she was a heavy smoker) and the fact that she sold Avon products.  Avon, founded in 1886 by David H. McConnell, reached 100,000 sales representatives in the United States by 1957; and became a household name in the 1960s and 1970s.  Few people alive in that era can say they never splashed on cologne from a shaped bottle (there were hundreds of designs from iconic images to animals and everyday items);  bathed in Avon bubble bath or had their Mom spray them down with Skin-so-Soft as bug repellent (it debuted in 1961).

I couldn’t find a picture of Eloise for today’s blog.  I will have to dig a little deeper in the family photo archive.  However, one of my passions is glass – I collected and even make art.  Sometimes I use Avon bottles.  Every Avon bottle, regardless of type, reminds me of Eloise, who gave me my first Avon bottle (a little shepherd girl).  My current favorite is lady liberty.  I think she would have liked it.  Happy Birthday Eloise!