Was your family affected by the influenza pandemic that occurred a century ago? Chances are good that it was.  The pandemic occurred in three waves.  The first, from March through July 1918, was the mildest wave with a low number or deaths, but unusual in that it lasted through the early summer.  The second wave began in August 1918 peaking in October and November before dying out in early spring of 1919, while the final wave extended from April 1919 through June 1920.  While scientists believe the three waves were caused by the same virus, they have samples only from the second wave, which caused the greatest amount of death and social chaos.  In genealogical terms this means that our ancestors may have died from the specific virus scientists call H1N1 that caused the two year pandemic, but the death certificate, newspaper notice or family memory may not include the facts.

The outbreak is thought to have begun in Haskell County, Kansas where the first documented case was noted by a local doctor in early spring 1918. The illness soon spread as young men from the county were drafted and sent to Camp Funston (a training base on Fort Riley), Kansas. On March 11, 1918, an enlisted man reported to the camp hospital just before breakfast complaining of fever, sore throat and headache. By noon he was joined by more than 100 of his comrades. By week’s end the number of sick at the camp had ballooned to 500, forty-eight of whom died before the flu seemed to vanish. 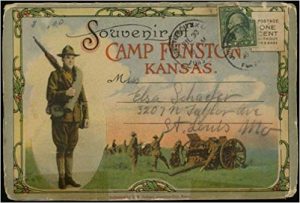 Camp Funston, constructed in 1917, was the largest of the Army’s sixteen training camps used during World War One.  More than 40,000 soldiers were trained for the U.S. Army 89th Division.  According to the Kansas State Historical Society, Funston operated as a city would with general stores, theaters, social centers, infirmaries, libraries, schools, workshops, and a coffee roasting house. The sleeping barracks each contained 150 beds; the size of an infantry company.[1]

If you are curious about whether your ancestor might have trained at Funston, his military record should provide that information.  However, Funston was not a closed campus; civilians were allowed, even encouraged to visit.  With the first draft in American history, military leaders were concerned about the morale and welfare of the new recruits and that citizens supported the war effort.

Major General Leonard Wood, the commander of Camp Funston, spoke to a women’s group in Topeka KS in November 1917.  He implored them to visit camps as often as possible because “boys like to meet a decent woman.”  He added that the soldiers’ families need their encouragement.  Also, the women should, “Help the Red Cross….YMCA, YWCA and the Boy Scouts.” And finally, they should not “look down on the home guards [because] they are serving their country too!”[2]

In the next Influenza post I will detail the home front and just how our efforts to fight the war conflicted with fighting the virus.

See also The Unsung Heroes Behind the Masks and my lecture at the National World War One Museum and Memorial on the centenary of the Spanish Influenza Pandemic and the U.S. Government response to it.