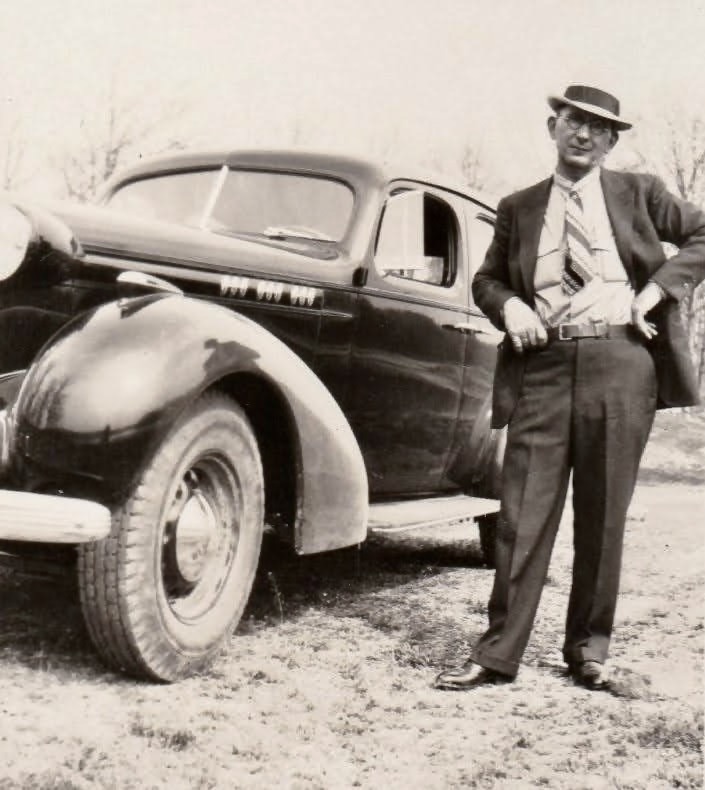 November 5th marked the 135th birthday of Carl Christian Siegel, my maternal grandfather.  To celebrate I wanted to highlight one of the things I have noticed while digitizing family photos- grandpa liked cars!  There are many photos of Grandpa and his family with cars so I thought I would share a few today.  Not being a connoisseur of old cars, I haven’t identified most so if you can recognize the make and model or have a memory related to it, shout it out in the comments.  But first a little history behind automobiles….

In July 1886, one year before Carl’s birth, another Carl in Germany patented the first vehicle powered by a gas engine, a three-wheeled, two-seat contraption that looked more like a motorized buggy than its antecedents.  The Benz Patent Motor Car #1 was the first, but other inventor/entrepreneurs across the globe were in the race to introduce their version of an automotive to consumers.  By 1899, there were at least thirty American companies making cars.  During the first thirty years of the twentieth century, the city of St. Louis was home to approximately 200 automakers accounting for nearly ten percent of all American car makers at the time.[1]  There were about twenty car companies in Kansas City during the same era.  But the early meteoric growth in the car industry came from Detroit and can be attributed to one man – Henry Ford.

Ford began by building a quadricycle in 1896.  He joined forces with others in Detroit to form the Detroit Automobile Company a year later, but Henry soon went his own way.  He knew what he wanted, and he knew he could build it.  He founded Ford Motor Company in 1903 and five years later the Model T rolled out the door into infamy.  In 1912, the Model T “Runabout” cost $575, but Henry was constantly innovating by improving manufacturing processes to decrease costs, savings he passed on to his customers.  One example is the reduction of time required to assemble the chassis went from 12.5 to 1.5 hours.[2]  Ford drove the last Model T off the assembly line in 1927, having sold over 15 million of them.

In 1908, only 18,000 miles of paved roads existed in the United States, most of which was in large cities, but car fever was everywhere.  Ford designed his vehicle, according to the company website, with a “light and strong vanadium steel alloy for critical parts” to deal with the primitive roads.  Eventually, national legislation in 1916 and 1921 funded road improvement, dramatically improving Americans mobility.

I can’t determine precisely when Carl Siegel bought his first car, but he had one a few years after he married Mary V. DeHaven in 1914.  This picture of the happy family can be dated from 1917 when Mary is pregnant with her third child, Eugene Allen, born in January 1918.  We know that Carl Siegel owned a Model T Ford in 1918 evidenced by his license for the car. It states that C. C. Siegel has registered a motor vehicle made by Ford with the motor number 1736871, type “Trg.”[3]  The car was registered on the first day of February 1918 with an expiration date of January 31, 1919.  The owner’s certificate of registration was 52151, licensed by the State of Missouri.  I don’t know why this license survived, because it was unlikely to have been his first, given the photo.  But with luck it did, and it is fun to see!

I have written previously about Carl’s wife Mary, who died of influenza in 1919.  Above is a photo of Carl and his three sons taken after Mary’s death.  Another shot from the same day shows the boys with their Aunt Tena, who lived with Carl and helped care for the children.  Carl moved off the farm in 1921, purchasing a general store in Florence, Missouri.  In 1927, he married Roma Rasa.  Together they ran the store until 1941 when they moved to a farm outside Florence.  When they owned the store, they had a truck used for deliveries.  There is a picture of it somewhere, but I can’t find it today.  I’ll post it later. 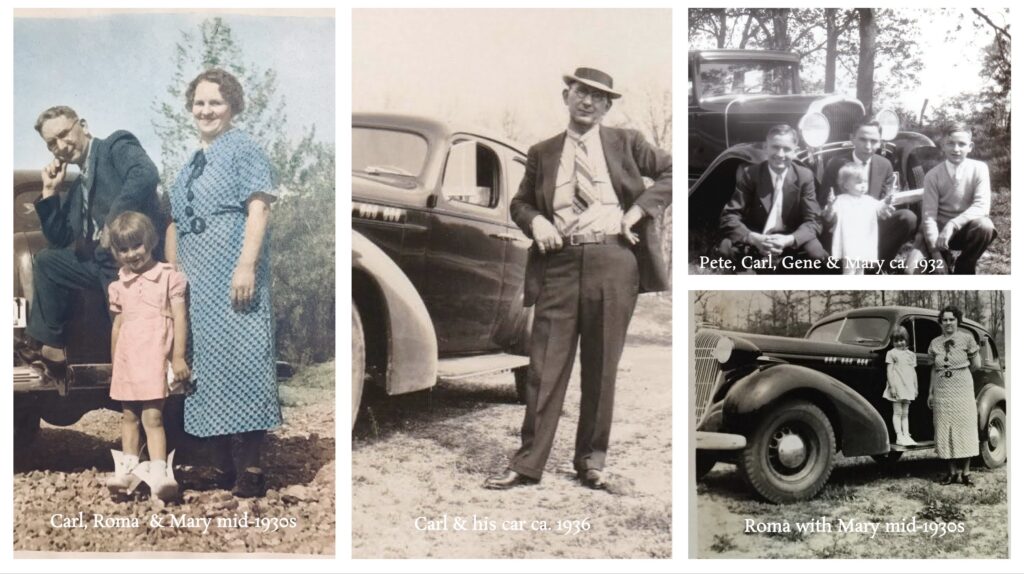 By 1936, General Motors (GM) had become more popular than Ford, gaining 43 percent of the market, followed by Chrysler with 25 percent, and Ford with 22 percent.[4]  Grandpa must have agreed with the trend towards GM, because he gained an affinity for GM’s line of Buick cars, and I think drove them for the rest of his life.

Grandpa clearly took pride in his cars, and I think he liked taking photos with them. The ca. 1936 photo of Grandpa is my favorite.  There aren’t a lot of photos of Grandpa by himself and certainly not like this one.  I love the bit of swagger!  He looks rather dapper standing next to his shiny black car.

Given the rural location of Florence, Grandpa may have found it challenging to maintain his cars given the rough roads he drove most of his life.  Carl and Roma’s farmhouse still stands on a gravel road today.  I remember the huge rocks on that “gravel” trail that seemed challenging by the time I was driving in the 1980s.  I can’t fathom what it must have been like when they first moved to the farm in 1941. 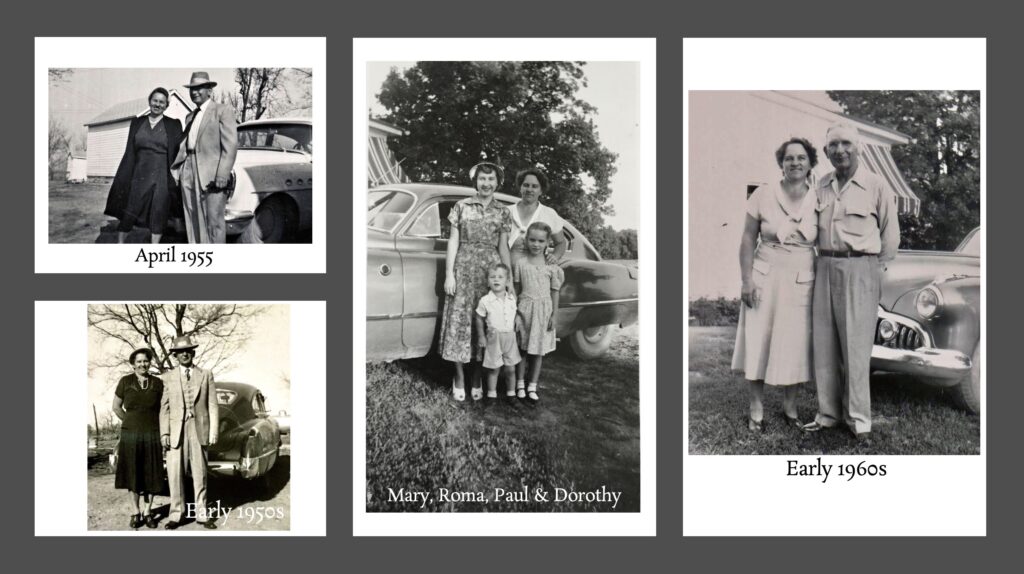 The joy of driving is in my DNA – it clearly came from both sides of my family.  I prefer the open road with little traffic, road construction or police that we deal with in modern life, but I’ve always liked the journey, especially on back roads that aren’t too straight.  I’ve seen a lot of country that way.  Looking at the photos of Carl and his cars, I know that inclination is inherited.  It makes me feel just a little closer to the man I’ve yet to meet.  Happy birthday, Grandpa!

[3] As you can see in the photo the number is blurred, but I think that is what is says!  “Trg” was listed as the type on many Model T licenses, according to other researchers, but I didn’t find what that means.