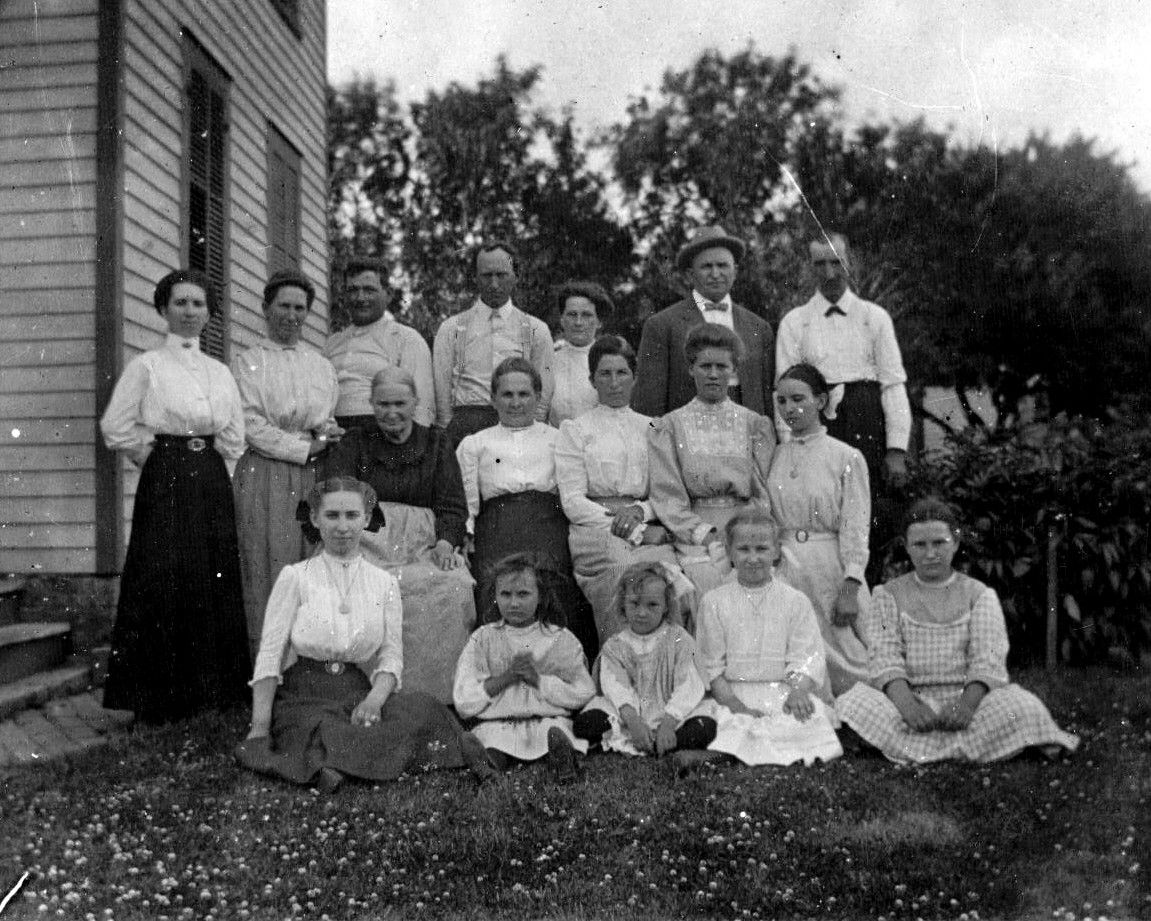 This photo is one I have had and studied for more than twenty years.  It has always been a favorite of my extended maternal family, including my mother’s grandparents W. P. and Charlotte Siegel and great grandmother Charlotte Raiffeisen.  Lewis Mothersbaugh and his wife great-aunt Maria also have held my interest and are easily recognizable, as are my grandfather’s sisters: Ida, Edna, Tena and Emma Siegel.  My mother’s great-aunt Amalia Raiffeisen is the easiest to distinguish as she had a white stripe in her hair by the time she was in her 30s. What I learned about six years ago is that the couple in the back row is Lewis Mothersbaugh’s sister and brother-in-law.  They lived nearby and often celebrated holidays and family events together, as did another sister who is not pictured.  That left the man in the hat and the light-haired woman sitting second from the right in the second row and possibly three girls in the front.

There are a few facts about this photo that make it somewhat perplexing; none more than it exhibits partial families with each missing members even though they were not yet of age to be married or likely “otherwise engaged.”  My grandfather is not in the photo.  One of the Raiffeisen sisters, Sophia, is not there; yet both lived in Syracuse during this time.  There is a possibility that the three little girls on the front row are the nieces of two people pictured; but the parents are not shown, although they would have likely been considered the closest neighbors at the time.  I am lucky enough to know these family details, but they are worth noting when considering other photos.  The cautionary note from this photo is that you must not fall into the trap of assumptions.  It is easy to conclude that groups make sense; that for example, all members of families were present in photos – at least for family events or special occasions.  Sometimes “strangers” – a friend of a friend or distant in-law shows up for a family event…and gets into a family photo.  When I look at my own family photos this is often the case.  A college friend or geographically distant cousin is in the picture.  So who are the strangers in my photo?

In conducting this investigation I began with what I knew about the subject matter: time and place.  Grandfather Carl Raiffeisen died in 1907; after that time the race was on – whoever of the three remaining Raiffeisen girls to marry got the house and farm.  Maria won; her sisters Amalia and Sophia (not pictured) were to never marry and moved to Long Beach, California within a few years.  Lewis Mothersbaugh and Maria Raiffeisen were married in November 1909 and they took over the Raiffeisen house at that time.  A small house was built on the property perhaps for Grandmother Charlotte Raiffeisen, who died in July 1911, or the sisters, Mollie and Sophie.  With that information I can date this picture with some confidence to the summer 1910 or 1911, given the visible foliage and the likely ages of those pictured.

Next I used the FAN principle (friends, acquaintances and neighbors) and considered the 1900 and 1910 federal census records.  The Mothersbaugh family (Lewis’s parents) lived in same neighborhood with the Siegel and Raiffeisen families; a fact borne out by family letters that survive from the period and that they are listed on the same page of the census enumeration.  In addition, the Richardson, Young and the Evans families are neighbors seen in later photographs.  However, the bald man in the hat and the woman seated second from the right are not found in any other family photo that I have seen.  While logically it could be a Raiffeisen brother – Charles, Julius and William lived with their families in nearby Sedalia at the time, none appear to match this couple.   Elbert R. and Ophelia (Mothersbaugh) Evans lived on a nearby farm and had three girls: Beatrice, Bessie and Gladys.  It is possible that the Evans family is represented here by three girls.  I have a c.1925 photo of the extended Mothersbaugh family which shows no light headed or complexioned women or men.  So for now my working hypothesis is that the picture represents:

Three generations of Raiffeisens (and their descendants)

The house is positively identified as luckily several photos of it exist.  The two-story farmhouse is distinguished by its trim, specifically the shutters and survived until ca. 1960s when it burned.  The farm remains in the extended Raiffeisen/Siegel family four generations later.