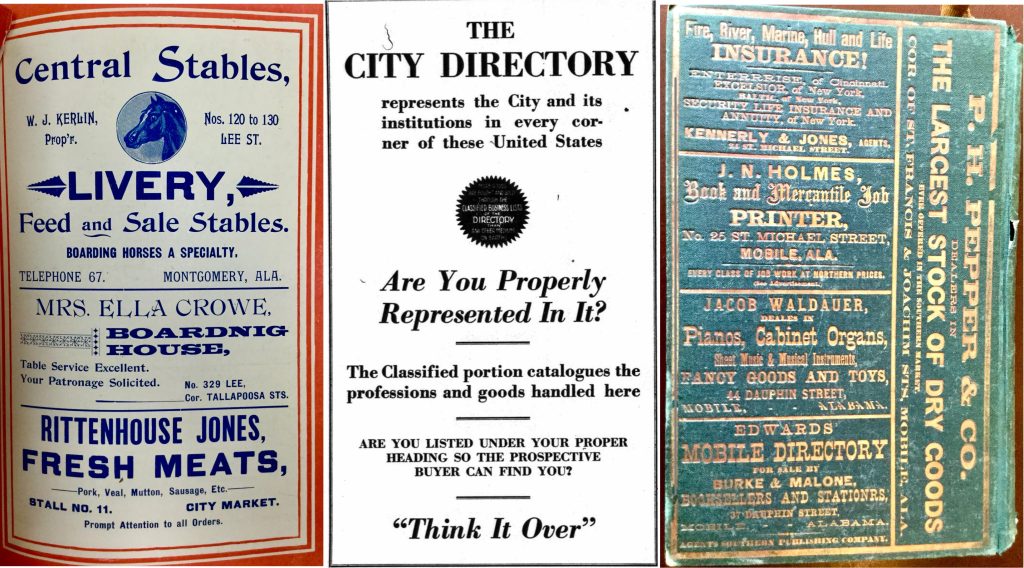 Genealogists know that city directories are not simply phone books, rather that these resources were created for businesses to get access to customers and vice versa.  They are genealogy gold ready to be mined!  Ralph L. Polk, the most widely known publisher, began his business with 1872 Evansville, IN directory, listing the names and addresses of all residents of the town.  Early Polk directories included a variety of information useful to genealogists including county courts, stage lines, steamboat companies, count residents on rural routes, and other detailed information on the locality. 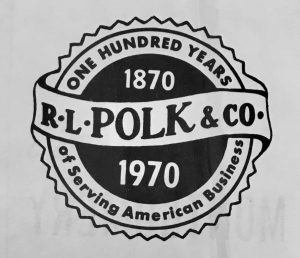 Polk directories also listed post offices, which was vital information if you knew Aunt Martha and Uncle Frank lived in Kansas, but they didn’t have an “address.”  You simply addressed your letter to them at the closest post office.  This is why early American newspapers printed a list of people who had mail waiting for them at the local PO.

Many towns and cities throughout the United States have had directories; even towns with less than 500 residents.  Often the guides were updated every year making them a great resource for historians and genealogists.  In the late nineteenth and early 20th century directories were sometimes done for specific professions (agriculture, railroad) or by state.

By 1888, Polk was publishing gazetteers for twenty-nine states.[1]  An added advantage of this resource is that Polk City directories are still printed for many towns today.  If you are researching your local area, check your library first.  It may be easier to discover which companies published in what years by looking at them on a shelf.

When researching in a directory, check the front pages for list of abbreviations, but also look at the cataloging taxonomy.  What terminology is used?  Categories changed over time but may include names such as carriage & wagon maker, clergymen, dairies, druggist, furnishings, infirmary, junk, justice of the peace, queensware, saloon, and talking machine, just to name a few.  Review details about city’s population.  It will help you to understand the growth of a city and may help you to understand why relatives lived together or moved from one area of the city to another.

Finally, look for city directories from other companies.  Sedalia, Missouri was a railroad town with train repair shops, making Sedalia information highly valuable by the rail industry, travelers, and residents.  During the late 1800s, Sedalia had at least five companies publishing city directories.  That is great news for genealogists because companies alternated years providing broader coverage.  Some of the directories are available on Ancestry.com, while others are on microfilm at the State Historical Society of Missouri.

We often think of city directories as helpful only if our ancestor lived in a good-sized town or big city, but that isn’t always the case.  Sometimes towns in different counties were collected into a single directory such as the Classified business directory of Sedalia, Clinton, Warrensburg, Boonville, California, Tipton, Windsor, LaMonte, Pilot Grove and Sweet Springs, giving correct information regarding all professional people, business and commercial houses found at the State Historical Society of Missouri (microfilm). Alternative directories include state gazetteers, railroad, and farmer directories, all of which tend to list a variety of towns and some unexpected information.

One example is the 1905 Missouri Community & Business Directory found on Archive.org.  It listed almost every locale in the state regardless of size, including four small towns where my ancestors lived in Morgan and Laclede Counties.[3]  It lists population, where the citizens bank, and the businesses in town.  Florence with a population of forty-five people had four general stores, a blacksmith, and a well-driller.  The first store, which my grandfather Carl C. Siegel bought from H.A. Bremer in 1921, specialized in merchandise, while the third, owned by my great grandfather Fred H. Rasa and his partner C.C. Lemke, also sold feed.  My paternal great-grandfather William T. Spencer lived in Drew in Laclede County in the early 1900s, which apparently had a population of seven people in 1905.  It is entirely probable two of those seven are my direct ancestors.  Similarly, my paternal grandmother Grace V. Kembel was born in Nebo; population fifteen.  While the dates do not match perfectly with my family timelines, the directory still gives me a feel of what life was like in these localities.

If you haven’t delved into city directories, try them out! Regardless of whether your ancestors lived in the country, a small town or big city, you are likely to find new details of their lives from these resources.  Happy hunting!

Here are a few places to search for your town’s directories: