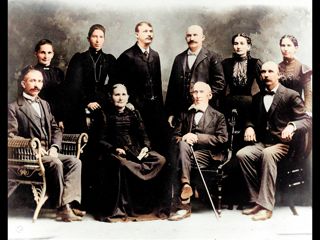 I awoke this morning with the thought that genealogy is a gift.  The trials and perseverance of our ancestors can inform, entertain, sadden, bring joy, and perhaps engender resilience in us.  How? Knowing those that walked before us survived pestilence and war during their lifetimes can open our eyes to the simple fact: humans can endure a great deal and may even thrive in times of chaos.

Yep, that’s what I was thinking this morning then I realized today (August 5th) is the 188th anniversary of the birth of my 2x-great grandmother. Time to celebrate!  Charlotte Schupp was born in Nassau, no not the one in the Bahamas, rather the one located in western Prussia, now Germany, in a small village called Bad Ems.

According to the Meyer’s Gazetteer published in 1871 Bad Ems sat in the Wiesbaden District of Hessen-Nassau, part of modern-day Rhineland-Palatinate, approximately 16 modern miles east of Koblenz and 44 miles from Hamm (Sieg) where her future husband was born.

I find joy and perseverance in the records of Charlotte’s life.  She was married to Carl Christian Raiffeisen on 13 June 1852 in the Holy Cross Lutheran Church in Cole Camp, Benton County, Missouri after the two had immigrated separately. The proof of their nuptials comes in the official county and church records but also I have found the preacher’s personal record book, a source that is often scarce.

The birth, baptism, and confirmation of Charlotte’s children at the church in Cole Camp, then St. John’s United Church of Christ (UCC) in Florence and finally at Immanuel UCC in Sedalia, Missouri are available; some have been digitized. What is important to genealogists is that all three churches are still alive today, have never been burned and thus, have a treasure trove of records. Heavenly choirs sing hallelujah!

Charlotte’s parents also left us records and an oral history from them we have woven their story.  John Anton Schupp was born in 1797 at Bad Ems, Germany.  The village Nassau is two hours (horse) ride from Bad Ems, and in this village in 1800 Elizabeth Knoth was born.  In 1824 at the age of 27, John Anton married Elizabeth.  He took his bride to Bad Ems, where they made their home.  His profession was that of a linen weaver and a wine inspector.  The family retains a book of John Anton’s weaving designs.

In 1846, the family left Bad Ems for America.  This journey began in ox wagons cross country to Koblenz, Rhineland-Palatinate, Germany, where the family boarded flat boats and sailed up the Rhine to Cologne; then on to Rotterdam, Netherlands, where they left the flat boats and boarded sailboats to cross the channel to England. Only a few hours stop was made before they set sail for 42 day-journey to America.  In New Orleans the sailboats were exchanged for steamers, which carried them up the Mississippi River to St. Louis, Missouri.  A smaller vessel then carried the travelers up the Missouri River to Boonville, Missouri.  From here a letter was sent, over the Boonville-Warsaw Stagecoach line to a brother of Anton Schupp (presumably Adam Schupp), living near Florence, Missouri, who in turn set out with his ox wagon to meet the immigrant family; arriving in Boonville in a little over a week’s time after receiving the letter.

The two families lived together until John Anton purchased his land on Haw Creek, located five miles southwest of Florence, Missouri.  The farm, comprised of 80 acres and a one room log cabin, was bought from Christopher Rogers.  Some farm implements and home furnishings were brought from Germany, others were purchased at Florence.  The 80 acres with all equipment cost in $400.00.  In after years joining land was homesteaded until the farm comprised a few over 200 acres.[1]

In 1849, another emigrant Carl Christian Raiffeisen, age 29 years, came to the United States from Hamm (Sieg), Germany.  Hamm, also located in the Rhineland, sits approximately 40 miles east of Bonn.  The German immigrant community was close-knit and while Carl initially lived with a family in Benton County, after a few years Carl was able to buy eighty-five acres of land in Morgan County, south of Florence near where his in-laws lived.[2]  Carl and Charlotte moved in a few years to a new location, where they would spend the rest of their lives on a farm near Syracuse.  Together they would raise eight children, seven of whom would live until at least until their 6th decade.

Carl passed away in 1907, having lived a long life.  Carl had defended his new country during the Civil War and thus was eligible for a pension after a law passed in 1890.  Carl applied, but the process was long and bureaucratic.  Eventually he received $12 a month.  Before his death in 1907 he worked to ensure Charlotte would receive a widow’s pension.  The pension application files are genealogy gold. Soldiers were required to submit to a health examination as well as providing witnesses and documentation to support their claim. On Charlotte’s widow’s pension claim is one thing few people get to see: the signature of my great-great-grandmother.  Now that is a gift worth sharing.  Happy Birthday Grandma Charlotte!

[1] The information about Charlotte Schupp’s parents and the family’s immigration to America came from a booklet authored by Emma W Schupp Berkey (1897-1972), daughter of August Schupp.