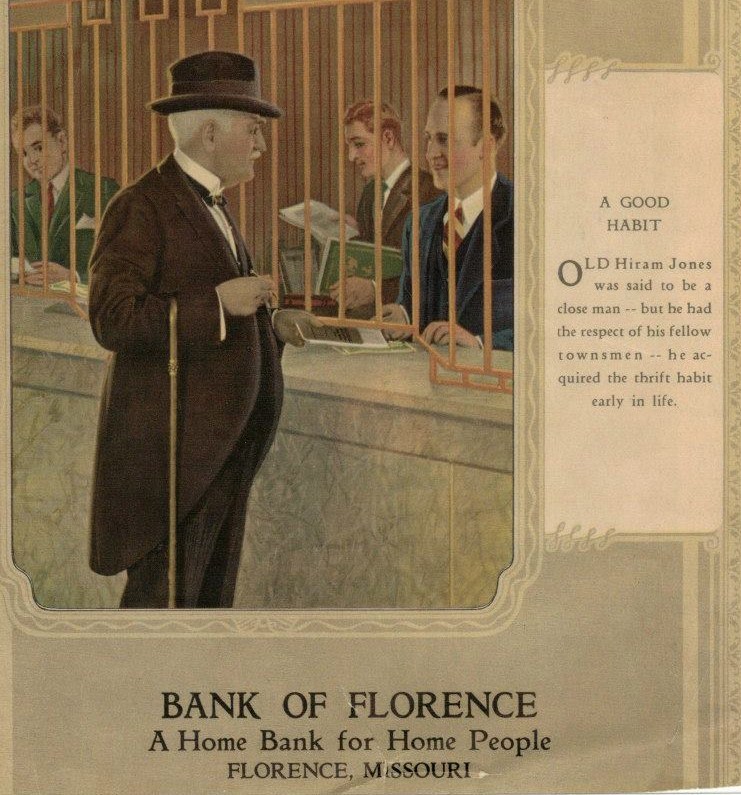 On April 8, 1918, the Bank of Florence was founded by a group of local businessmen in Florence, Missouri, a town of approximately one hundred men and women.  The organization was formed with H.A. Bremer as president, F. H. Rasa, vice-president, and P.W. Buehler as cashier.[1]  John S. Daniels was named cashier in December 1918.[2]  The bank opened with the required minimum amount of $10,000 capital.  One year later the bank had received $13,874 in additional deposits from Florence-area residents.  The Board of Directors included the three men along with William Mertgen, C.H. Brunkhorst, Louis Siegel[3], and Robert Eldenburg.[4]

The bank did not survive the Great Depression.  But there is more to the story than a bank that existed for sixteen years.  Founding a bank in 1918 must have been a daunted task.  The entire world was at war and April 1918 marked the one year mark since the  American entry into the conflict.  Goods were rationed, prices controlled.  What the Florence businessmen could not have known was that Spanish Influenza would soon strike, killing millions across the globe, and further dampening commerce.  The early days of the bank had to have been as unsettling as the end.  Yet these men made the choice to risk their own money to assist their neighbors, family, and friends.

Up until the Bank’s founding, citizens of Florence and the surrounding area had to travel elsewhere to borrow money or deposit their own funds.  In the 1919 Missouri biennial banking report, Morgan County had seven banks (including Florence), while neighboring Pettis County had twelve and Benton County had ten.[5]  Transportation at the time was limited to rough, unpaved roads by car or buggy, making “running to the bank” a day-long prospect, one that took a businessman or farmer away from earning his living.

While there were federal laws governing banking, there was no federal deposit insurance. Most individuals in small towns had little knowledge of banking or the regulations.  A 1905 Atlas of Morgan County highlights this fact by described banking practices in a two-page section detailed the relationship between a bank and its customers including how to open an account, what information would be included in statements, and what the requirements were for borrowing funds.[6]

The community of Florence was not alone in the desire to have better access to funding.  Between 1917 and 1919, more than fifty new banks were opened in Missouri, most of which were in small towns with no direct access to rail transportation.[7]

Florence’s bank seemed to do well through the 1920s, although little detailed information about it exists except for several checks some of which were written to my grandfather Carl C. Siegel (he married Fred’s daughter Roma).

One of the founding members of the bank, Frederick Henry Rasa, (December 1, 1873-October 11, 1937) was a farmer, stock dealer, businessman, civic leader, and my great grandfather.  In 1918, Fred was the vice president Florence’s bank and by 1922, he had replaced Bremer as president.[8]  Fred remained president through at least 1926 and likely left the board of directors around that time.[9]

Not having had a chance to do deed research, it is not clear to me when the bank building was constructed, although given that “Bank” is on the parapet, it was purpose-built, likely in 1918.  Fred had owned the land on which the bank building stood.  Records show that the property was purchased by F.H. and wife Lena Rasa along with Rasa’s business partner C.C. Lemke on October 1, 1906.  The property changed hands a few times between 1909 and November 6, 1917, when Rasa re-purchased the building and land.  The Bank of Florence purchased the property on June 15, 1918.[10]  Four years after the bank closed H.A. Bremer bought the bank building for $500.[11]

Two days after his inauguration on March 4, 1933, President Roosevelt announced a nationwide banking holiday, allowing federal authorities to assess banks across the country, close failing banks and allow others to reopen.  On March 15, the Springfield News-Leader reported that Florence was among the 350 Missouri banks licensed to reopen on the following morning.[12]  Across the country deposits exceeded withdrawals.

However, on November 9, 1934, newspapers around Missouri declared, “Bank at Florence Decides to Quit.”[13] The Florence Bank directors made the decision to permanently close the bank.  At that time the bank held $45,125 resources: $28,373 loans, $1,500 bills payable and $32,106 in deposits.[14]  Florence was the first state bank in Missouri to close following the 1933 national bank holiday.  What is significant about the closure was that the directors CHOSE to close it.  No one else decided they had to do it.  While that may not sound like a big deal, I think it is.  It had to be a terrible decision for them to have to make.  No one would have access to any of the funds until the state banking auditors went through the process, which did not occur until December 28, 1939, when the bank was officially liquidated, only paying 39.5 cents for every dollar owed.  The community endured as has the bank building.

I’m proud to say that my great grandpa was a founder of the Florence Bank and that he cared for his community.  Today is his birthday and I hope he knows I’m sharing his story.  Happy Birthday, Grandpa!

[4] Biennial Report of the Commissioner of Finance. Missouri. Jefferson City, MO: Department of Business and Administration. Division of Finance. 1919, 142. Accessed on Google Books.

[8] Biennial Report of the Commissioner of Finance. Missouri. Jefferson City, MO: Department of Business and Administration. Division of Finance 150, 1922.

[9] Biennial Report of the Commissioner of Finance. Missouri. Jefferson City, MO: Department of Business and Administration. Division of Finance 150, 1926.