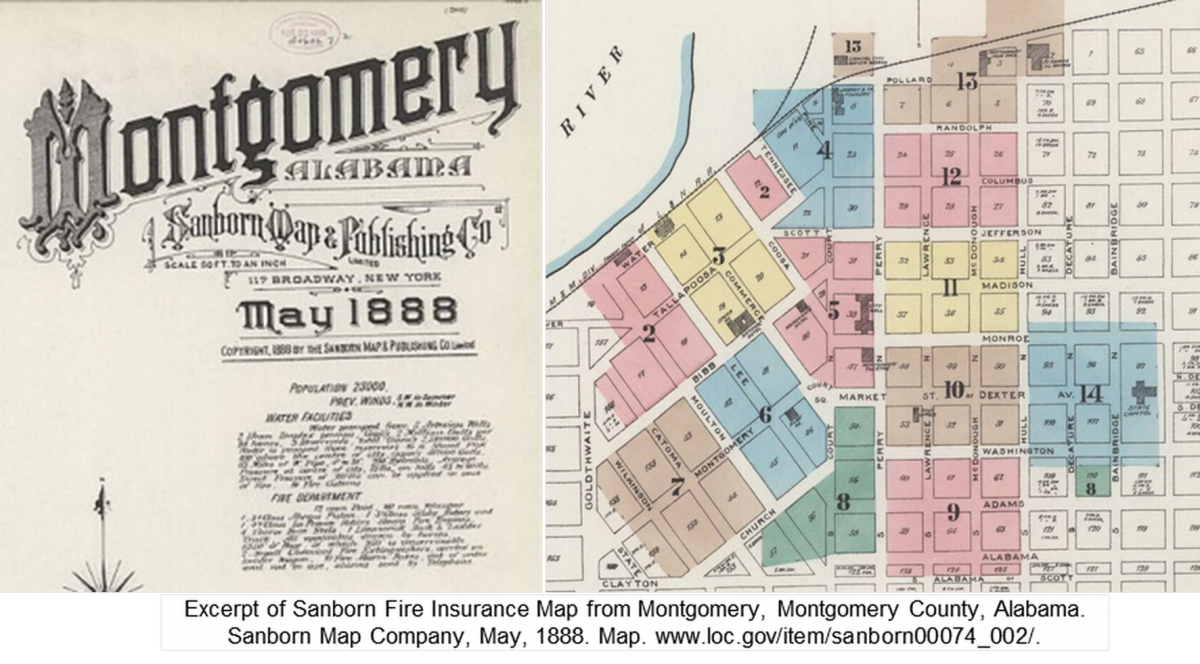 Sanborn Maps are great tools whether you are new to genealogy or a professional researcher.[1]  The maps are essential if you are doing building or property research; however, for genealogists these maps offer valuable contextual clues to how and where our ancestors lived.

The Sanborn Fire Insurance Map Company was established in 1867 with the purpose of compiling and publishing maps of U.S. cities and towns for the fire insurance industry to assess the risk of insuring a particular property.  The maps depict commercial, industrial, and residential sections of over 12,000 cities and towns in the United States, Canada, and Mexico.  The scale for Sanborn Maps is 50:1 and thus, the number of maps increased as a city grew.

The 1884 map of Montgomery, AL has twelve sheets; 1888 has nineteen and the 1894 has twenty-four.  For most cities mapping began in the 1880s and generally went through the 1950s.  Montgomery, Alabama was mapped in 1884, 1888, 1894, 1900, 1910, 1922, 1950 and 1953; with the later years overlaid on existing maps to show changes in existing structures and neighborhood expansion.  Maps were expensive to print so corrections were pasted over the original when possible.  Sanborn Maps were hand-drawn and color coded to represent building materials.  When the maps were first microfilmed at the Library of Congress (LOC), they were in black and white.  Both versions are helpful, but the full color maps are visually striking.

As with any atlas, the first page of a map shows street and map indexes.  Not all of the Sanborn Maps include a key, but you can find general ones online.  Often included is an enlarged section for the downtown or city center.  Always take a moment to read the details on the first page as they often contain interesting clues about the city.  Using the 1888 Montgomery County Map as an example the first page includes: date, population, details of the fire department capabilities and equipment, and notes that alarms are sent via telephone (thus the city clearly had phones by May 1888).  Additionally, street names, block numbers and a lis

ting of “Specials” which were named businesses, – mostly manufacturers or large business concerns – were included.

The Library of Congress has the largest collection of extant Sanborn Maps including over 50,000 maps containing more than 700,000 individual sheets.  LOC provides a searchable database for maps up to 1900, with new maps being added monthly.

Sanborn Maps provide geographic details of the area as well as building details.  You can learn how many floors a building had and sometimes how many rooms and the functions of each.  Maps show details for all floors so if you ancestor owned a two-story building in which he operated a store, the Sanborn Map will likely provide clues to whether he lived above his business or rented it out as apartments, retail or office space.  Throughout the 1800s upper stories were used by clubs and benevolent associations such as the Odd Fellows, Masons and YMCA.  If your ancestor’s building housed such a group, it is likely he was a member.  If your relative lived in a rural area not covered by a map, you might discover where he worked and how he got to and from work, as transportation lines such as railroad or streetcar are detailed on the maps.

The 1894 Montgomery, AL map shown above depicts four distinct buildings, each with numerous purposes or businesses within its walls.  The building on the far right is three stories tall.  The first floor was divided into four retail spaces that housed (left to right) a grocery store, saloon, fish market and a second grocery concern.  In the center is an entryway with a confectionary (candy) and fruit store.  The second story isn’t labeled as such, but likely the City Offices were on the second floor because the third floor had no dividing walls; it was one big space labeled “Hall.”  You can discern those details if you look closely at the map and understand what the abbreviations and notations represent.  That building is not fully depicted in this excerpt, but it houses a large city market that extends the entire block.  The context in this instance is that city offices were housed where there was space.  In 1894 that happened to be over a fish market and grocery store with a large market behind it.

The map provides further context by showing that within one block in Montgomery, Alabama in 1894 there were three grocery stores, two fish markets, one dry goods concern, a furniture store, two confectionary stores and a saloon.  The building labeled “Bar” is most likely home to a barber.  The Greil Block houses Hotel Fleming on the second and third floors.  It also states that the hotel is comprised of “sleeping rooms only” meaning no bath or toilet.  This map also highlights one of the limitations of Sanborn Maps – in the Greil Block a “S & W Ho.” is shown.  This “Store and Warehouse” reveals no clues to its usage.

The numbers on the bottom of the drawing are street addresses on Monroe Avenue, while the numbers inside the drawing represent proportions.  If you ever see two numbers stacked, it represents a change in address.  The “updated” number is usually closest to the building.  This tradition of providing street address changes is vital to accurately detailing what happened where.  In some towns businesses easily moved down the street to a better space for their business, but in others, addresses changed when new structures were added or a building was remodeled and provided space for multiple stores fronting the street.  Newspaper research can aid in determining which changes happened on your street.