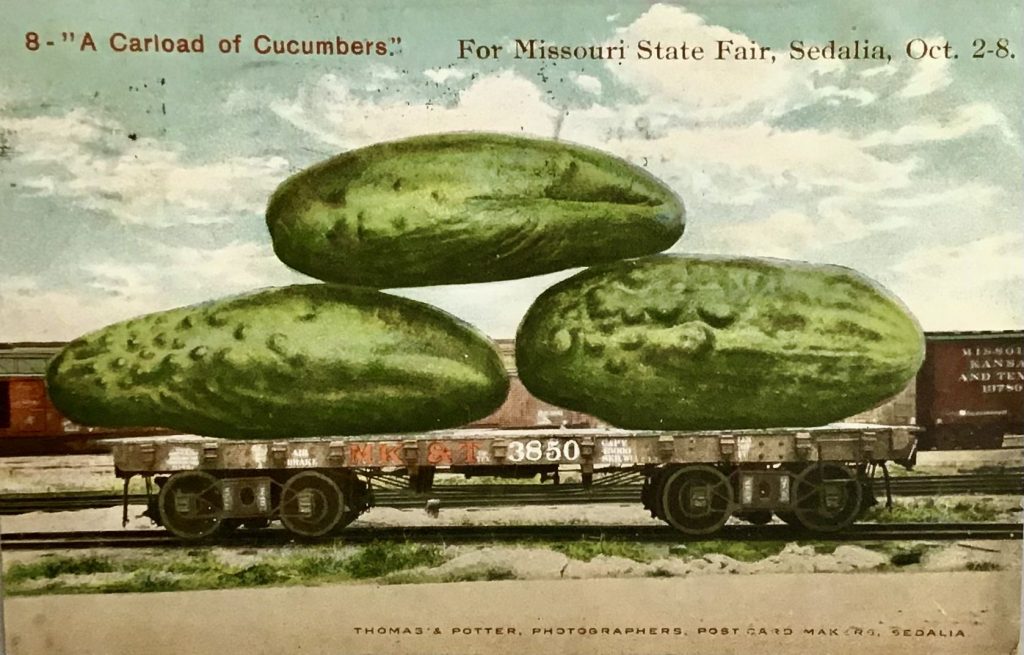 Ever since I was a kid, I have loved postcards.  I think my ancestors instilled in me a desire to travel and in previous centuries getting a postcard in the mail allowed one to get a glimpse of that faraway place.  I have postcards sent to me decades ago from far flung places including Cape Canaveral, FL; Calgary, Alberta; and Washington, DC.  I have a collection of cards sent to other family members as well.  When my grandmother Roma died, we found hundreds of postcards in her farmhouse.  I sorted them and while we kept a few, we sold most of them.  How I wish we had kept them all!  Recently I have been examining my collection for a new project and I have found several great genealogy nuggets!  This one titled, “A Carload of Cucumbers.” For the Missouri State Fair in Sedalia, Oct 2-8 [1909] is one of my favorites.

Exaggerated postcards became popular in the United States during the first decade of the twentieth century. This occurred as the Postal Service began rural free delivery (RFD), giving rural areas access to mail for the first time.  Simultaneously, photographic studios began to show their creativity by editing pictures of sometimes fictional, local oddities.  Most were geared toward inviting tourists to a place or event.  As automobiles became affordable for many Americans, towns across the country saw financial opportunity in becoming a known tourist stop.  The “Carload of Cucumbers” was created by “Thomas A. Potter, Photographers, Post Card Makers, Sedalia;” a local photographer capitalizing on visitors to the Missouri State Fair.

While “deltiology” or the collecting of postcards has been a hobby almost since the advent of postcards, family historians know the genealogical value of the reverse side.  The postcard with the train carload of pickles was sent to my grandfather by his cousin.  Carl C. Siegel and Otto J. Raiffeisen were born days apart in 1887 and remained close.  I can prove that statement mostly by the number of postcards I found from Otto to “Charley.”  While Carl had four sisters, Otto was an only child.  The young men lived one county apart, but without personal means of transportation, that could seem like a significant distance.  The message on this postcard leads me to believe they traded correspondence regularly.

You probably raise such cucumbers in Morgan Co. but of course they only grow in Pettis Co.  Glad you liked the coat.  Hope you fill it with game all the time. Big circus in town the 13th. Wish you were down to go with me.

Otto was attending the University of Missouri in Columbia so he must have been home to visit his family in Sedalia when he sent this card.  Carl was working on the family farm in Morgan County.  I also have a postcard sent to grandpa from someone named John, who was attending the Central Business College in Sedalia. The front of the card has a lady dressed to the nines with a title, “waiting.”  John added, “Charley she’s ‘waiting’ for you.” In August 1909, John suggested he would see Carl at the State Fair. He adds, “I’m going to like it here.  It seems strange to be in town.”  That suggests to me that he is a farm boy living in the city for the first time and that he was likely a friend/neighbor of the Siegel family.

While these postcards do not harbor brick wall-shattering revelations, they do suggest a few things about their lives in 1909: