I was researching yesterday on newspapers.com  when I found an article in the Kansas National Democrat on Jan 27, 1859, 161 years ago to the day. It details the efforts of the Kansas Territorial Legislature from Thursday, January 20th. In a single day the number of major issues considered was astounding; many of which would dramatically affect the future of the Territory and later State of Kansas.  Those decisions included but were not limited to the following: 1) the building of a territorial road between Fort Riley and Atchison; 2) organization Wyndott (sic), Richardson, and Weller Counties; 3) Organization of the town of Grasshopper Falls; 4) Bill #60 proposed the  permanent location for the seat of government (a capitol) for the territory; 5) house bill #77 prohibiting slavery was sent to the Committee on Federal Relations; 6) repealed Militia Law of 1857; 7) acts to incorporate companies, societies and organizations including the Lawrence Savings Bank, the Lawrence Bridge Company, the Neosho Falls Water Power and Manufacturing, the Wabonsa Town Company, the Society of the Sons of Truth, the Washington Lodge #5 of the Free and Accepted Masons, and the Mercantile Library and Literary Association of Wyandot (sic); 8) And finally a measure to incorporate Kansas Wesleyan University (the fact I was seeking!). This find was a great reminder of how important newspapers were to every aspect of life from the small town to national-level political decisions that would determine the fate of so many beyond the Kansas territory. 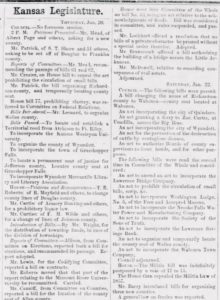 Some of the facts in the article changed over time including the following:

According to the Library of Congress the Kansas National Democrat was published weekly from July 30, 1857, to March 14, 1861, in Lecompton, Kansas. Pages can be found at the LOC’s Chronicling America or on newspapers.com.  Would you like to know more about using newspapers in your research? Watch for more stories with tips on this blog or contact me for help at michelle@romamarygrace.com.

[1] “Wabaunsee County, Kansas.” Legends of Kansas: History, Tales and Destinations in the Land of Ahs. Accessed on 27 Jan 2020, online at http://www.legendsofkansas.com/wabaunseecounty.html.

[3] “History of the Frontier Trails of Kansas.” Legends of America: Exploring history, destinations, people and legends of this great country since 2003. Accessed 28 Jan 2020 online at https://www.legendsofamerica.com/kansas-trail-history/.